Born within walking distance of some of the world’s greatest mineral mines in Butte, Montana, minerals, gems, and fossils were a part of everyday life for international award-winning jewelry artist Naomi Sarna. Early memories are of being in her grandfather’s store where miners came to shop and learning to do many types of handwork.

Sarna left Montana and attended the Pennsylvania Academy of Fine Arts in Philadelphia, where she studied sculpture and the art of fabric draping.  After careers as a caterer, psychoanalyst, and medical hypnotist, Sarna went back to her roots.  She studied gemstone faceting, which taught her about light reflection in gemstones with Bernd Munsteiner and metalsmithing with Heikki Seppä.  Sarna soon turned to the carving of gemstones and creating masterful jewelry showcasing her carvings.

To find the best material to carve, Sarna has traveled around the world from Tanzania and Madagascar to Arkansas, visiting mines and hand-selecting the rough gems that she turns into treasured objects. She also finds gem material when she visits the gem fairs in Tucson, Arizona where the world’s most important gem dealers gather annually.

When Sarna looks at a rough gemstone, within a few moments of seeing it, she knows what she will carve from the stone. While most people look for clean stones, Sarna likes stones that have inclusions. She uses them as a roadmap to guide her as she carves the stone. Central to her work is the play of light and shadow, movement, texture, and the use of bold color combinations. According to Sarna, carving gemstones is a relatively simple process using a stationery arbor.

“Growing up I had a sense of being able to do almost anything as long as I could do it with my hands.”

What she says is more complex is going beyond the act of carving and creating the art seen in her jewelry and precious objects. Sarna’s work is inspired by the sensuous curves and flowing curls of the Pre-Raphaelite and Art Nouveau periods. Growing up Sarna had the complete set of “Wizard of Oz” books, which had Art Nouveau drawings that she loved and to this day continue to influence her work as a jewelry designer and artist.

Sarna has been the recipient of 23 Spectrum Awards in both gem carving and jewelry design.  She was recently awarded a Silver Medal for her White Jadeite carving, “Winter Bird, Spring Greens” at the 2019 Zi Gang Bei Jade Exhibition in Suzhou, China. Sarna received a Bronze Medal for her unique Nephrite Jade carving, “Mossy River” at the same competition in 2017.

Sarna makes her remarkable and unusual pieces in her New York studio. In this space, she has created pieces that are represented in the Smithsonian’s Permanent Collection of American Gems as well as many private collections. Sarna had her first solo show “Stone in Motion” at the Wilensky Mineral Gallery in New York City and she was part of a group show “Gemstone Masterpieces” at the same gallery. She is also the Jewelry Arts Journalist for Unique, the Private Jet Magazine. View Naomi’s awards and honors archives. 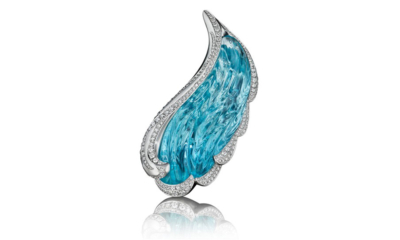 And receive a special holiday gift from us of 10% off your purchase. A gift code will be sent to your email.