NEW YORK, NY / January 20, 2016 / PRNewswire — Naomi Sarna Designs is proud to accept two of the highest honors from the American Gem Trade Association (AGTA) at its 2016 Annual AGTA Spectrum Awards™ in Tucson, Arizona. Receiving AGTA’s 2016 “Best Use of Pearls Award” and the “Gem Diva Award” marks a seventh consecutive year of accolades from this internationally-distinguished jewelry and gemstone competition. The awards will be given in on February 6 at AGTA’s GemFair™ Tucson 2016.  Additionally, both 2016 award-winning pieces as well as a selection from her collection “Objects of Desire” will be presented daily at Booth 1628 in the AGTA Designer Corridor, Tucson Convention Center, from February 2 through 7. 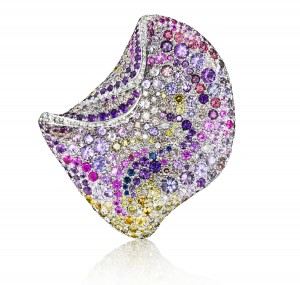 “It has been an exciting time,” explains Naomi Sarna. “My complex rutilated quartz carving was a finalist in one of the world’s most important gem carving competitions, the German Idar-Oberstein Awards. Lapidary Journal recently issued their 2015 GEMMYS with eleven photos of my pieces. And now…I’m very pleased to report that I won AGTA’s Best Use of Pearls for the second time in a row, and that my colorful white gold Pink Petal Brooch won a Gem Diva Award! These awards now bring the total to 18 AGTA awards, which just thrills me — a serious honor.”

The American Gem Trade Association (AGTA) is comprised of over 1,300 U.S. and Canadian designers, artisans and trade professionals that pay special attention to the use of natural colored gemstones and cultured pearls while maintaining the highest ethical standards. AGTA has been instrumental in the support of designers like Naomi as well as the community-at-large with detailed educational programs, advocacy and support.

Designing and crafting from Naomi Sarna Designs in New York City’s Diamond District, Naomi creates timeless designs inspired by the gems themselves. She seeks to evoke a sensual allure that literally draws one in, wanting to explore its lines and to caress it –to find renewing pleasure and wonder to hold and to wear.   Naomi thinks of her pieces as more than just jewelry or sculpture.  A true jewel is one that once removed leaves its imprint, its memory, where it was, where it was meant to be.